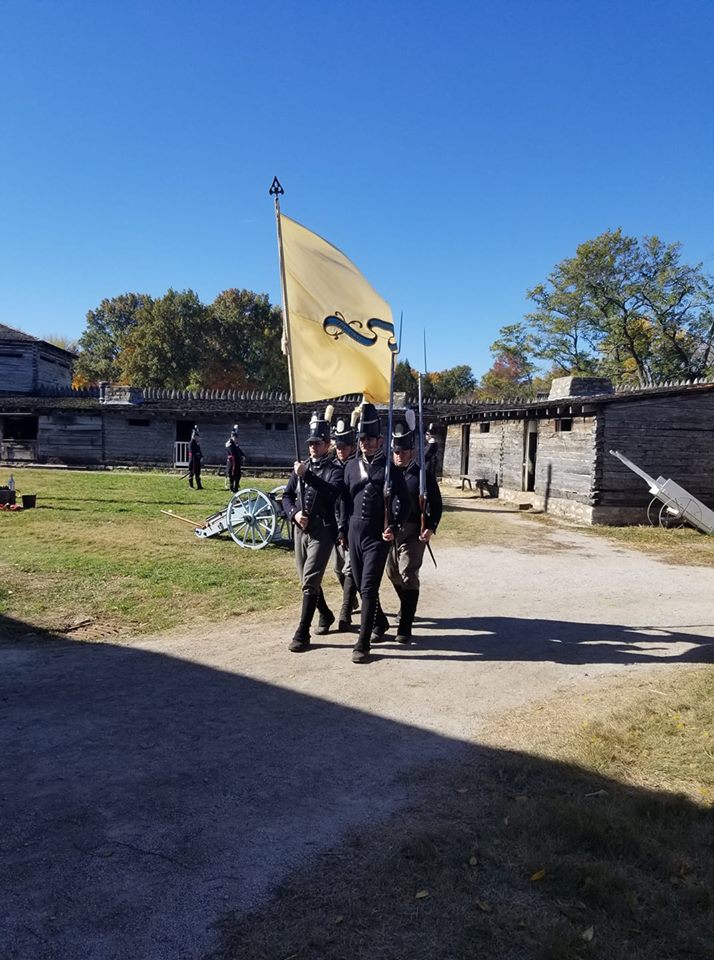 The 1st Infantry Regimental, Fort Osage Fall Muster, October 28 2018
,
Clemson's Company began in October of 1987, during the first Fall Muster held at Historic Fort Osage, Missouri, near Kansas City.  Fort Osage is a reconstructed Factory Fort built on top of the original foundations.  Dave Bennett founded the unit to support the fort, which in 1987 was only used as a "a Mountain Man resort."  Thus the term "This is a fort not a mountain man resort" was first began. Unit leadership was also instrumental, in convincing Jackson County to establish their daily interpretation at the site as circa 1812. Since then, the unit has traveled from Canada to New Orleans, Fort Osage Missouri to Fort McHenry. The unit portrays 1st Infantry soldiers, Captain Eli B. Clemson's Company & Nathan Boone's Missouri Rangers and their dependents.

The 1st Infantry - (Living history or portrayals of Regular Infantry Clemson's Company, US (Boone's Missouri) Rangers and dependents) has set the standard over the years regarding Garrison events including:  pay calls, piling (stacking) of arms,Funerals, court martial, Sick calls, Blockhouse defense demonstrations, ladies taking tea, garrison gardening, Knapsack inspection, open fire cooking demonstrations, Washer Women at work, mail call, church call, light infantry and artillery drill among the many other scheduled activities. Garrison members have reproduced Soldier enlistment forms, Standing Orders of the 1st Infantry, Sergeant Warrants, etc. Research by David Bennett in 1989 illustrated the use of the "Priority of Enlistment" number by regular infantry during the War of 1812 era. The unit began to mark their equipment with the priority of enlistment number plus took roll call with the priority of Enlistment numbers as well.  For many years, most Regular 1812 living history units did not "Pile Arms" as this important military task was not properly documented in any manuals. Bennett found "Pile Arms" in Hoyt's 1811 printing of Practical Instructions for Military Officers & C. and "Pile Arms" has now been utilized by many other units. Dave Bennett and Mike Harris, was instrumental in obtaining a VA marker to commemorate the fallen soldiers at Fort Osage 1810 to 1820. They sent in VA forms, contacted Steve Allie at the Frontier Army Museum to support the forms and a bronze plaque and granite marker provided by the Federal government. The Marker was commemorated at the Fall Muster, 1999.

At Fort Osage on July 4th, 1992, a large Garrison flag was constructed by members of the 1st and also our sister unit the 7th Infantry.  For many years, this large garrison flag was flown at events across the country, including New Orleans, Mississinewa, Fort Gibson, Fort Madison, Fort Miegs, Fort Belle Fontaine, Fort Massac, and a host of other locations. This Garrison Flag was retired in 2007.  A new 10 x 15 Garrison flag, made from wool bunting purchased by Dave Bennett, and hand sewed by Sally Bennett and help from  "The Federalist Ladies" land dedicated at the 200th anniversary of Fort Osage, September 2008. This Garrison flag flew over the very first War of 1812 Bicentennial event, The Battle of Tippecanoe, November 2011. Since then, the Garrison color has flown at the 200th War of 1812 on the Natchez Trace, May 2012, plus at the 200th Battle of Mississinewa, October 2011.  Has flown at Battle of Mississinewa 2008 to 2019 and at the Fort Osage Fall Muster every October 2008 to 2021, and the 200th Bi-centennial at Fort Osage 25-26 May, 2013. The Garrison flag also flew at Fort Madison September 12 2015. The Garrison flag flew over the Hermitage Tn. in March 2017.

The 1st Infantry carried a Steve Hill replica of the 1st Infantry Regimental, pattern of 1808, made of silk, and copied off of the original 1st Infantry color at West Point. We maintained for several years  a quarterly print newsletter, The Despatch, edited by Mike Harris, and then for several years online.  Unit commander election will be held in October 2023,  appointments for Sergeant are made by the Unit commander. Everyone has the opportunity to allow their abilities, time, and skill to help the unit.The 1st Infantry has prided itself on moving historical accuracy forward within the American War of 1812 Living history community in which it has succeeded. Active members in good standing supporting the unit's annual Symposium and the annual Fall Muster at Fort Osage plus either an away event or special event may earn the coveted Clemson Company Challenge Coin from the unit commander. In September 2013, the unit participated in a War of 1812 scene for the new Documentary Movie WE THE PEOPLE, narrated by Kenny Rogers and Morgan Freeman.     The 1st Infantry Clemson's company attended the 200th anniversary of the Battle of New Orleans,January 2015, fielding a 5 man 3 pound artillery gun crew plus a 24 man infantry company. Members were instrumental in the organization of the event, field command and organizing civilian activities. Events supported in 2016 included:  Cragfont Tn, War of 1812 Symposium, Canoe Race at Fort Osage, Mississinewa, Fort Osage 30th Muster. For 2017, the unit supported the War of 1812 Symposium and Hermitage Andy Jackson's Birthday celebrations, Armed Forces Day May, Fort Osage; 30th Battle of Mississinewa and the 31st Fort Osage Fall Muster.  The 35th annual Fall Muster at Fort Osage was held October 22-23 2022.

Annexed in Captain Clemson and Symmes company book, was the STANDING ORDERS OF THE 1ST INFANTRY, which has been reproduced and is issued occasionally to enlisted ranks from the commander for meritorious service to the Regiment.

For further information or if you wish to join, please contact Paul Rosewitz at paulrosewitz1@gmail.com

Updated November 3  2022
All material on this site is under copyright.